/ Things to do / Golf and Recreation / The Lang Scots Mile

Until standardisation of weights and measures in the 18th century, a "mile" in Scotland could be a variable distance. Generally a Scottish mile was longer than a mile in England, a fact which was immortalised by Robert Burns in his poem "Tam o' Shanter" - "We think na on the lang Scots miles..."

After the Union of the Parliaments in 1701, the standard English measure began to be introduced in Scotland, gradually replacing the Lang Scots Mile. The Lang Scots Mile Walk was created in 2002 on the seafront of Ayr to commemorate the town's historical links with Burns as well as to encourage healthy exercise. It was estimated that a 10 stone man or woman walking Lang Scots Mile would burn off 115 calories and a 16 stone person, 184 calories.

The "Measured Scots Mile" is situated between two car parks at Miller's Folly on Cromwell's Fort to Blackburn Car Park. The route is totally flat and suitable for wheelchairs with superb views over the Firth of Clyde to Arran, Kintyre and the Cumbraes. There is a children's play park halfway along the path. 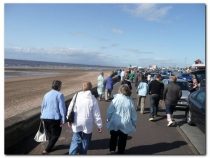 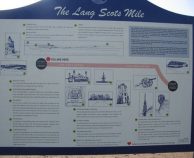